Here are five more pit bulls that were rescued on Animal Care Network runs. They are all in need of permanent adoptive homes or foster homes with training and experience in working with dogs that have issues.

Carrie has already been passed around to five different homes before ACN rescued her. She is extremely fearful of anyone or anything new, so much so that she prefers to hide in a closet or small area for her own safety. Carrie was severely abused and being passed from home to home and place to place only escalates her distrust and fear of humans. She does seem to get along with other dogs, no cats or young children.

Cola has also been very badly beaten, any sound or movement, even slight, brings him to the ground. He has also been passed from home to home and needs to be able to trust again. Does get along with other dogs, no cats or young children.

Cody was adopted from an animal shelter and the adopter could not keep him any longer and refused to take him back to the shelter he was adopted from. The owners had nothing nice to say about Cody…”he goes to the bathroom everywhere, has separation anxiety, breaks out of every crate, will go after the other dog and will go after anyone than goes near his owner
among other things”. They have chosen to pass their problem, if it is true, along to someone else. No other pets or young children

Jackson was rescued from the streets as a puppy in very bad shape and had clearly been abused. The family chose to keep him, had him neutered but at eight months of age, he has become too much for them. He is completely petrified of men and “some” woman. He can jump a fence and is terrified of noises
and new situations. Does get along with other dogs, no cats.

Richard’s owners tried to sneak this seventy pound pit bull into their apartment, which does not allow dogs, how long could that last? So here he is, strong and stubborn, very exuberant and a lot of dog!!!! Richard can scale a fence in two seconds flat. Does not do well with other dogs. No cats or young children.

All of these dogs need long term commitment, training and patience. 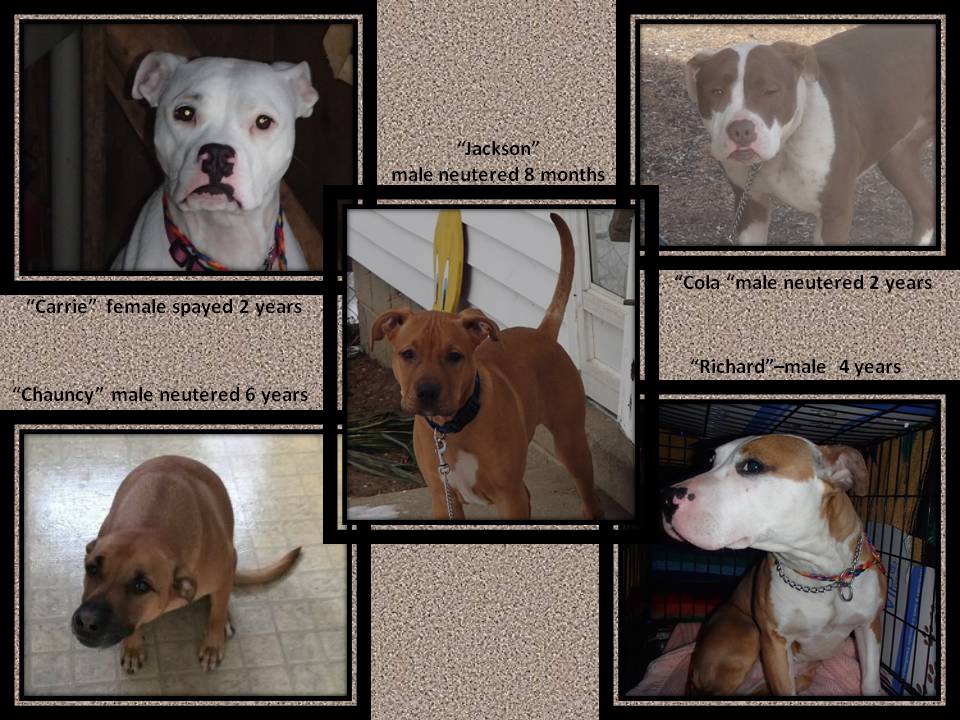