Inbreeding is running rampant in our target areas! Owners are oblivious to the fact that YES mother and son can mate, brothers and sisters can mate, etc etc etc. It is disgusting and the aftermath  can be deadly.

Pocket was the sole survivor of a mother mating with her son. Not only was this a problem but they were all living outside. This address was reported to authorities but the ACN ALWAYS does  rechecks and thankfully so! Come to find out that Pockets mom had 8 puppie…s and everyone died except him. We do not know if they froze to death or died from health reasons, maybe both. Upon a recheck call we found out this out and immediately persuaded the owner to give us the puppy! They also gave us the
son dog who was extremely aggressive from living outside on a chain for so long.

Pocket was partially blind, deaf, emaciated, damage to his legs and constantly walked in circles. He experienced some severe seizures and after serious consultation from our veterinarian we decided the most humane thing to do was to have him humanely euthanized.

It broke our hearts, but the genetic defects were too severe and it was not in his best interested to keep him alive. He was in a foster home for the best week of his short life, where he was warm, fed and very much loved.

We held little Pocket while we had him put to sleep and cried for him….and are still crying as we write this story. Rest in peace little man.

To prevent this from happening again at this address, we insisted that the mother dog be spayed, enough is enough! She is now spayed, has gained fifteen pounds and is living inside the house for the time being. 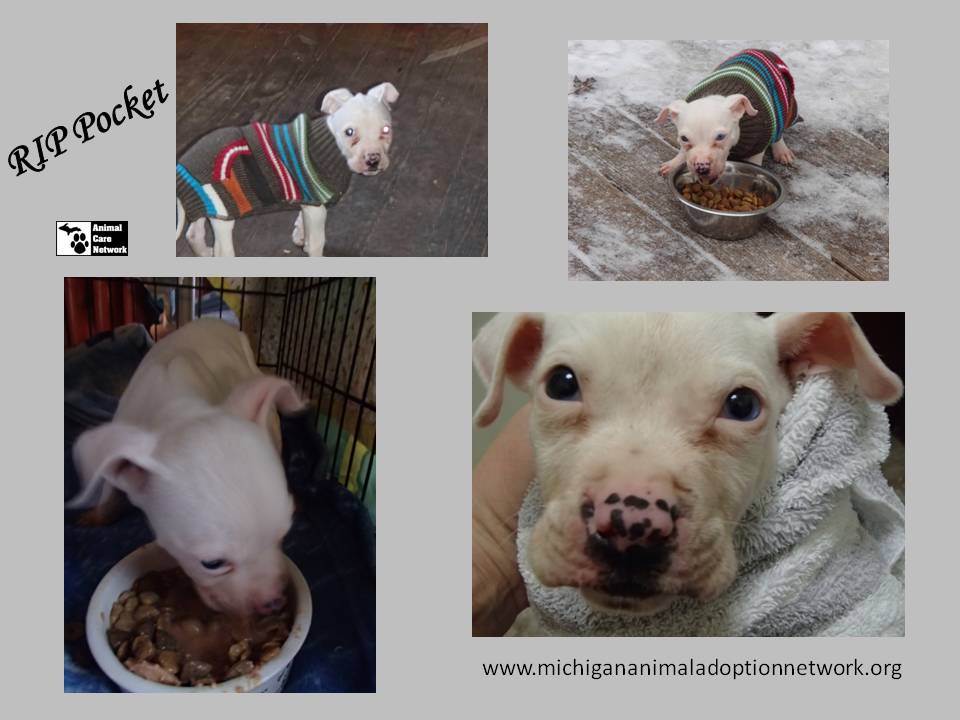