Thanks to the volunteers who helped out with poor Rocky. I think he affected all of us in the same manner.

We did more for him that the owner ever did in the one short abusive year of his life.

The owner called the ACN and demanded that Rocky be picked up immediately before they “killed” him with “their own bare hands”.

Thanks to the volunteer for turning around and going back to Pontiac to get him immediately.

Thanks to the three volunteers for watching over him and trying to work with him for several days, with no luck, no progress whatsoever.

Thanks to the volunteer who was able to get him out of the kennel without using a control stick which would have just stressed him out more.

Rocky finally somewhat relaxed in a big cage in the rescue van on a comforter and finally stopped shaking and trembling. He still bared his teeth and warned us to stay away but it was about as less stressful for him as it could have possibly been considering his temperament and distrust for humans.

Thank to the compassionate veterinarian at a local animal shelter that gave him a little sedative in the van so he would not stress anymore.

Thank you to the volunteers that helped carry him and petted him and talked to him while he was on his way to heaven, truly a much better place for this poor dog, a victim of his surroundings like we have never seen.

May those awful people face their judgement some day for what they did to him and let’s hope and pray they do not get another, we will have to keep an eye on this address.

Thanks again to all the volunteers, animal welfare workers and veterinarians that attempt to make this transition to Heaven for dogs and cats like this as loving and as peaceful as possible. This is the part of this work that no body wants to do and many will not do. For those that we rescue that cannot be saved due to health or temperament we must follow through until the end.

If Rocky only knew for this short time by the sounds of our voices, our calm actions and our willingness to help him, then we did our part and we did right by Rocky!

In your memory we will continue to never turn our backs on dogs that are not adoptable.

Proverbs 12:10 The righteous care for the needs of their animals,
but the kindest acts of the wicked are cruel. 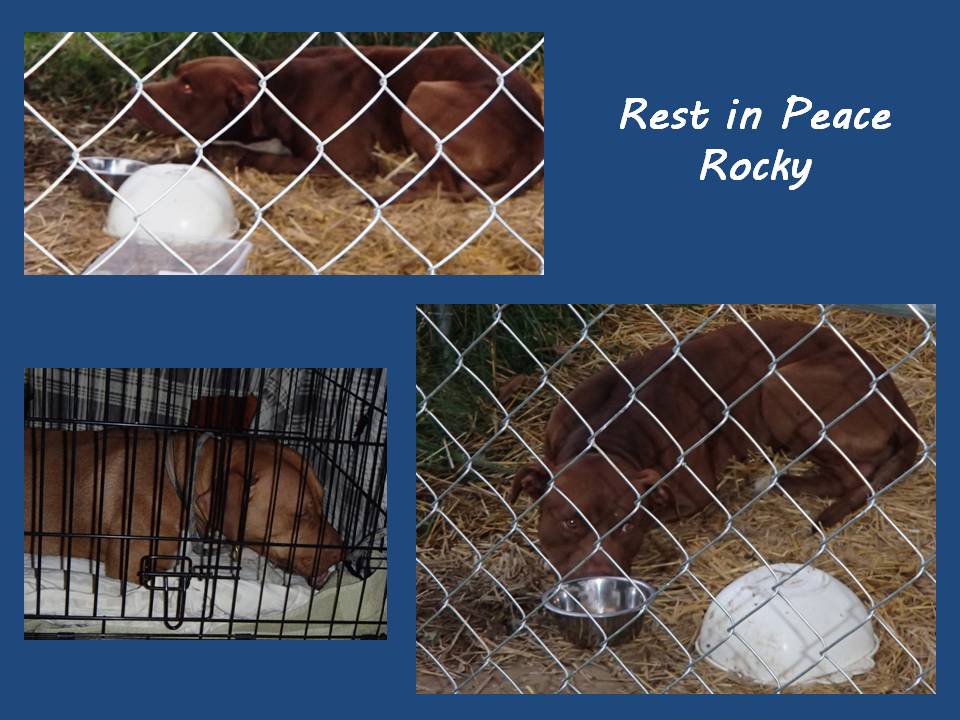