Another story about the frustrating neglect and refusal by owners to do what is best for the animals. This story came about in February by a person that saw a post about puppies for sale and was horrified when she saw the condition of the animals and the environment

We followed up and were able to rescue 2 puppies from a very bad situation. The owner had three adult dogs and a litter of eight puppies. It was a nightmare, the house was deplorable and the puppies were in feces filled crates in the basement with no food and no water. We begged and pleaded for the entire litter but the owner was very argumentative,
had a answer for everything, an excuse for everything and would only give us two. These puppies were in such bad shape it took a month of vet care and rehab to get them back to health. They were covered in feces and urine burn, starving and thirsty, oh so thirsty.

We made multiple appointments to have the adult dogs in the house fixed and vaccinated for free, with four consecutive no shows. We even offered transportation, but the only thing the owner wanted to do was argue and make up excuses. We continued to beg for the remaining puppies to no avail, more lies and more stories, they all have homes, we are selling them, on and on. More frustration.

It was only thanks to a friend of the owner that the mother dog was finally taken in to be fixed, the owner refused to get the other two done, more excuses and reasons. “The second female dog never goes outside, so she will never get pregnant.” Even though she was hit by a car last month while she was running the streets. Also FYI the mother of the puppies was also impregnated while running at large.

Three months later, here we are again. We received information that the remaining six puppies were still in the basement, not much bigger than the first two that we had rescued. Thanks to our Sue for her continued patience and never giving up, we were able to get two more of the puppies, believe me, with much more arguing and resistance. These puppies were also in bad shape, showing signs of growth stunt from malnutrition and growth damage due to being kept in a small crate for long, long periods of time.

Thank you to the Michigan Animal Rescue League for taking on these puppies, nursing them back to health and finding them loving, everlasting homes.

This address has been referred to local animal control.

P.S. These puppies had never been outside and you should have seen them running, exploring and playing with other dogs in the foster home. Having water was like the best thing in the world to them. They drank and drank and then drank some more. Nothing better than the sound of thirsty puppies actually having access to and enjoying fresh cool water. 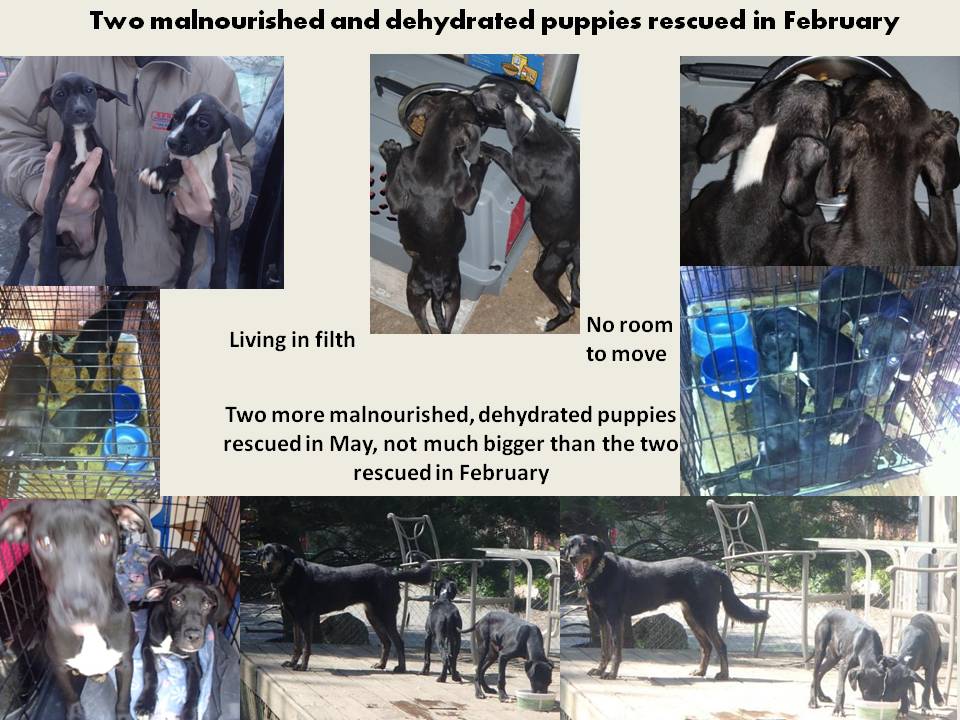