Sadly, we have told many stories about pit bulls that we have rescued that appear to be puppies, but in actuality they are adult dogs that have never grown properly due to malnutrition, starvation, poor living conditions, being confined to a small crate, etc.

It is absolutely amazing how these dogs survive to begin with, probably just getting the bare, minimum ration of food and water, horrible neglect and living conditions.

These are actually quite incredible little survivors!!!

Daisy is one of them….she is an adult pit bull, almost one year old, she weighs 17, yes 17 pounds!

To make a long story short, someone was being evicted and a kind neighbor wondered what had happened to their puppy that she had not seen in a very long time, maybe six months.  The person moving blatantly said “oh she has been in the basement and we can’t take her with us, so we are going to leaving her here”.  In our target area, tensions can run high between neighbors, so you have to play it smart and safe if an animal is involved.

The good neighbor was horrified and went down in the basement and pulled this emaciated pit bull out of a tiny cage filled with feces and urine.  She said she would take the dog and left with her immediately before any confrontation happened.  She took her home offering her a little food and water, and giving her a bath.  Daisy was petrified and shaking, clearly traumatized, starved, dehydrated.

Daisy’s rescuer decided she was going to keep her, so she called ACN for help, we had her other dog and a cat fixed!

After waiting a little bit for Daisy to gain some weight and trust with people, we had her spayed and vaccinated with our friends at All About Animals, thanks to a lifesaving grant from Best Friends Animal Society!!!

When we brought Daisy home, we believe we gave her the first toy that she ever had, and she would not put it down.  So, so cute!!!

We stopped by to check on Daisy and she is now following her “new” owner all over the place, is gaining her confidence and also got some new toys!!!  She carries the squeaky spider everywhere!!! 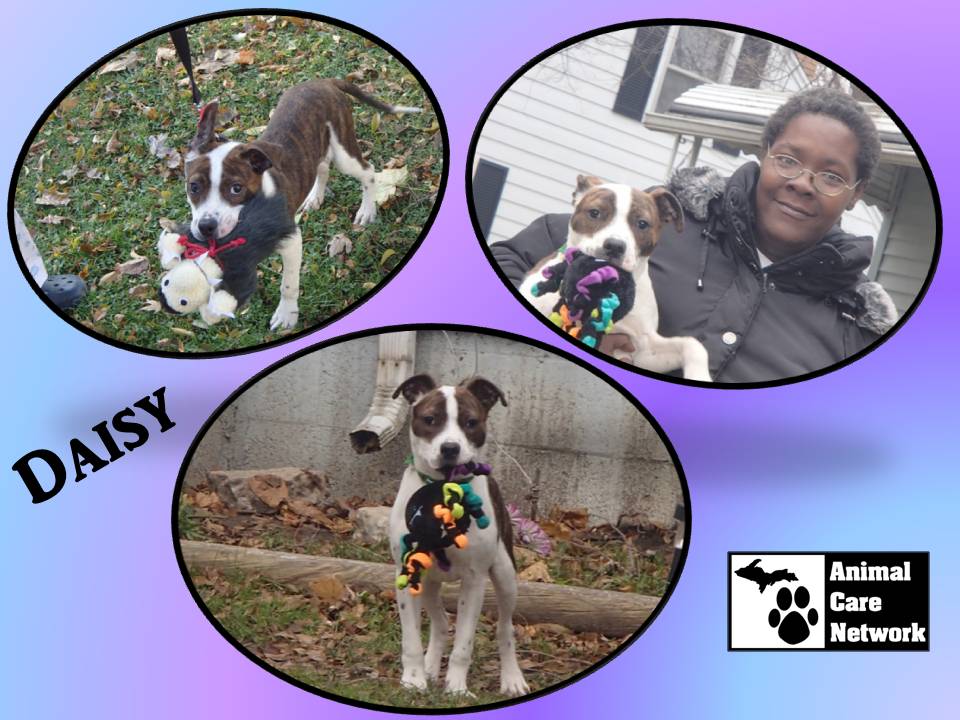