They call it the “Woodward Dream Cruise” but it certainly is NO dream for the dogs in our target area. It’s a Saturday in August and it’s hot! The temp is hovering right around 90 degrees. People have lined the sides of Woodward with their makeshift tents. They have set up bbq’s and have coolers full of cold drinks. Everyone is comfy and ready for a good ole time. Everyone except the “beloved” dogs they’ve left chained in their back yards. That is where Edwina and I come in. We’re here to tend to these neglected dogs.

Every dog we visited today was hot! Very few had water or food. Some had no shade at all. All of them were being eaten alive by the flies. Literally!! Open, red, infected wounds on the tips of their ears where the flies had bitten so many times that the skin breaks open. Every single dog we saw today was miserable and so were Edwina and I.

If dealing with the heat, the traffic from the cruise and the horrible conditions of the roads in Pontiac were not enough we also had to deal with cursing from drunk and obnoxious recipients of our help. People getting pissed at us because we only had dry cat food and not wet…how dare us! People telling us they have taken on yet two more animals into their home when they already have two chained in the yard that they neglect and mistreat. And…people refusing to leave the Dream Cruise to tend to their sick, injured 15 year old “beloved” dog. That is where Pac comes in.

We were asked to check on an address where a dog had been attacked by two other dogs. We had never been to this address and did not know what to expect. Upon arrival, there he was, chained to a tree. He was quiet and mellow, he didn’t make a peep and seemed to be afraid of us. He hid behind the tree. We tried to comfort him, gave him food and water (he had neither) but he was not interested. He looked very weak and we were very concerned for him. A young man from the house came out and it was then that we could get close to Pac’s to evaluate his wounds. The tips of both ears where the flies had bitten for 15 years were gone. They just weren’t there. His ears were noticeably shorter and left was thick scar tissue that had fresh fly wounds on them. But that was the least of our worries. Edwina discovered a gaping gash on his hind leg that was infested with maggots. Pac needed medical attention immediately and we were not leaving until he got it. After much coaxing with the boys mother over the phone (whom did not want to leave the cruise or pay for medical care) we were finally able to get the boy and the dog into my car and headed to the vet. Pac had to be lifted into the car. He was weak, lethargic and had no spark in him. We got him to All About Animals where the vet flushed his wound of the maggots (which was not pleasant to witness) and gave him pain meds and antibiotics. They took really good care of him. Pac’s demeanour was better, he looked much more comfortable. We still don’t know if he will make it. It depends on if he gains his appetite back and if his old body is able to fight off infection. It also depends on whether or not the family will keep him inside while he heals so no more flies can enter the wound again. Inside, where he can get some comfort and be cool in the a.c. Inside, where he won’t be lying on the floor of a dirty, dilapidated dog house. Inside, where maybe, just maybe, he will be treated like a dog should be, as part of the family…as someone they actually love. They say they will but the people we deal with say a lot of things and a lot of these things are lies.

Edwina and I tended to a few more addresses after that. Not many though…we just didn’t have it in us. As I told Edwina…”it’s as if the human psyche has a limit.” I had reached my limit. I had endured witnessing the abuse and neglect of too many animals for that day. I needed to get home, take a long, hot shower and hug and love on my dogs for the rest of the night. Oh…and pour myself a big glass of wine to dull my memory of the day.

Sweet dreams, Pac
. I love you. ❤ We will be following up on you! 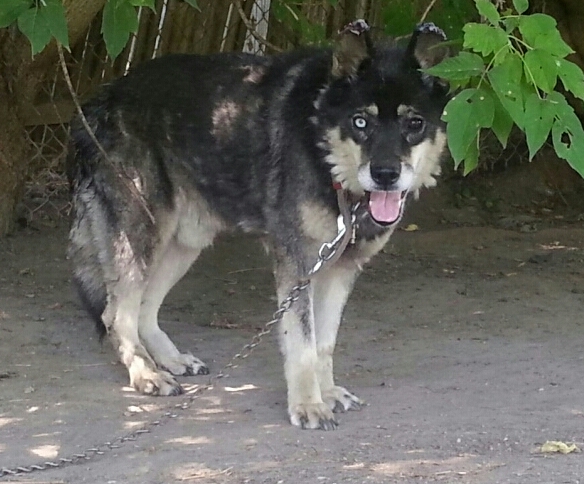