Being on the streets is difficult, some days more than others. Sometimes I think I should be used to the things that we witness, the cruelty, the inhumanity and the suffering
that is oh so common.

Some nights I come home from the streets and I feel like “was this real?”, because it sure seems like a bad dream, a nightmare.  But then I wake up the next day and do it all over again.

Some of these poor animals stories are much more difficult than others, with some I beat myself up, thinking why didn’t I notice this dog before it got so bad, why didn’t I check that hidden back yard while this dog could still stand, why didn’t someone call me about this dog sooner, when she had her last meal, two or three weeks earlier, why didn’t I pull up in that long hidden driveway and notice this skinny dog with no shelter during all these cold winter months. Some of these pictures I cannot even look at right away, nor tell the story for weeks maybe months because it affected me so much and was so sad and hurtful.

Stormy is one of these stories. I received a call from a pet owner that stated she could not feed her dog anymore and wanted her picked up. It was during our very long cold spell.
I respond immediately to every single dog or cat pick up call for fear of the person letting the animal go or giving to someone on the streets, which happens ALOT, or just the bad condition the animal could be in.

I immediately went to pick up Stormy, pulled up in a long driveway to a house set back from the road, a house we had never been to, didn’t even know they had a dog. There was Stormy, crouched over barely able to stand, underneath a partial makeshift carport.

I asked “has she been out here with no shelter or protection all this time during the cold weather?” The answer was yes.  I felt sick to my stomach. Stormy wagged her weak tail as I approached her, I had to carry her to the van, she could barely walk. She licked my
face as if to thank me for finally coming to get her. Her gums were cold.  She would not eat. She huddled in a big comforter and made a nest.

She was emaciated and dehydrated, yet bloated , with sores and marks all over her fur and body.  When animals are deprived of food for so long it can cause serious problems
including death.

Stormy was warmed up immediately and taken to the vet. Unfortunately the combination of starvation, dehydration and hypothermia had taken a  deadly toll on her body, she was suffering and shutting down.

Our decision was to humanely and lovingly euthanize her, while being hugged and kissed, Stormy went to heaven, where she will never suffer again.

She still weighs heavy on my heart and when I look at these pictures, tears come to my eyes.

I just wish I would have known that she was there sooner.

As hard as we try to notice every animal that we can, every backyard that we can see, every shed and garage that looks suspicious, every alley that we pass, every vacant house, every strange set up in a back yard, every pen, every privacy fenced yard, I guess there will always be animals that we don’t know about, are not aware of, and that just feels
terrible. Especially when you come across a dog like Stormy. 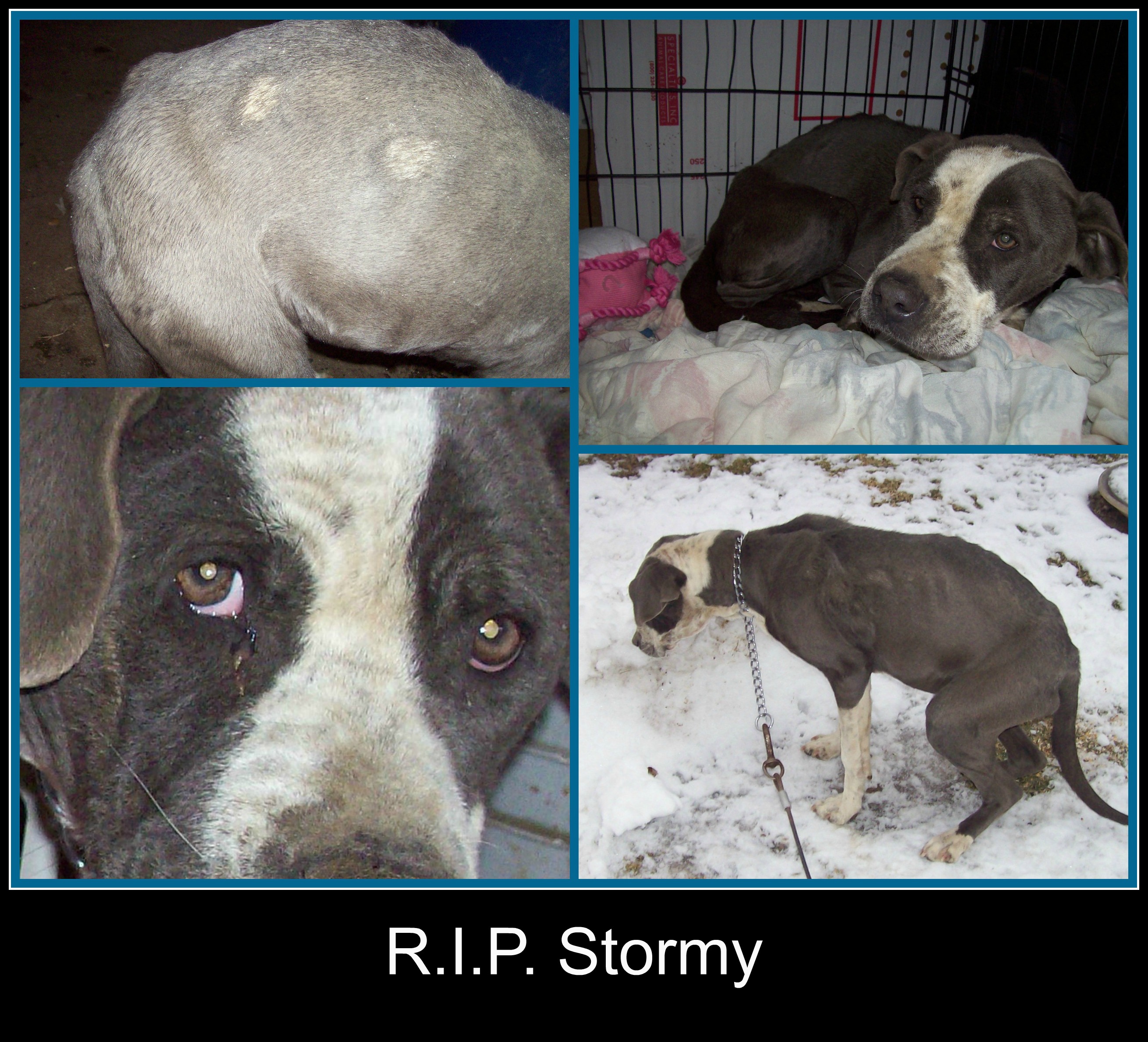