This is a touching story about how some homeless people live and what they can encounter, how they survive on the streets and even befriend animals on their sad and lonely journey. It makes you realize how fortunate and blessed we are and that there arestill some good, kindhearted and caring people out there.

The ACN received a call from several local hospital nurses late one night who were concerned about a homeless patient that had been caring for a large amount of cats and kittens behind an abandoned building.

ACN responded the next morning (cold, windy and rainy) and upon arrival found propped up boards, empty pizza boxes, a sleeping bag and lots of trash. This was the makeshift “bedroom” that was being used by the homeless person AND this large family of cats. After crawling into this hidden shelter with a flashlight, were shocked to find 22 kittens in one big pile with one cat sitting on all of them. We were successful in rescuing all the kittens and the one mother cat and later rescued several more adults. I have never seen anything like these tiny little kittens all huddled together to stay warm and dry. They were extremely young, some looked a little sick with upper respiratory. But………what to do with them all? Act immediately and think later! This was on a Sunday, so once again, we called upon our friends at the Michigan Animal Rescue League who miraculously came through again.
Katherine and Katie were amazing, immediately bottle feeding all 22 kittens and warming them up. They kept mom with 7 kittens and had two nursing moms that accepted some of the other kittens. Then they found foster homes for some of the others and by the end of the days, EVERYONE was accounted for and taken care of!!

It has been two weeks and all of the cats are doing extremely well. Unfortunately we have not heard any news on the homeless person, if she is out of the hospital or any word on her condition. While we were at the location rescuing the cats, a man stopped to inquire what we were doing. We told him what had happened and he told us that he stops by regularly to check on the homeless person and brings her a hot and ready pizza every week. This man Teddy was amazing and this was his contribution, to at least do something for this person. In his eyes this gesture of kindness was nothing, but to us doing SOMETHING is better than doing NOTHING. More importantly this gesture probably meant the world to this homeless person.

So when we lay our head down on our pillow at night in our “real” bedroom lets be thankful for what we have and try to be more like Teddy by doing something kind for someone that has nothing, someone that has a “makeshift” bedroom, someone that is living out there alone and outside in a world that can be pretty scary.
***All of these kittens will eventually be available for adoption at the Michigan Animal Rescue League. 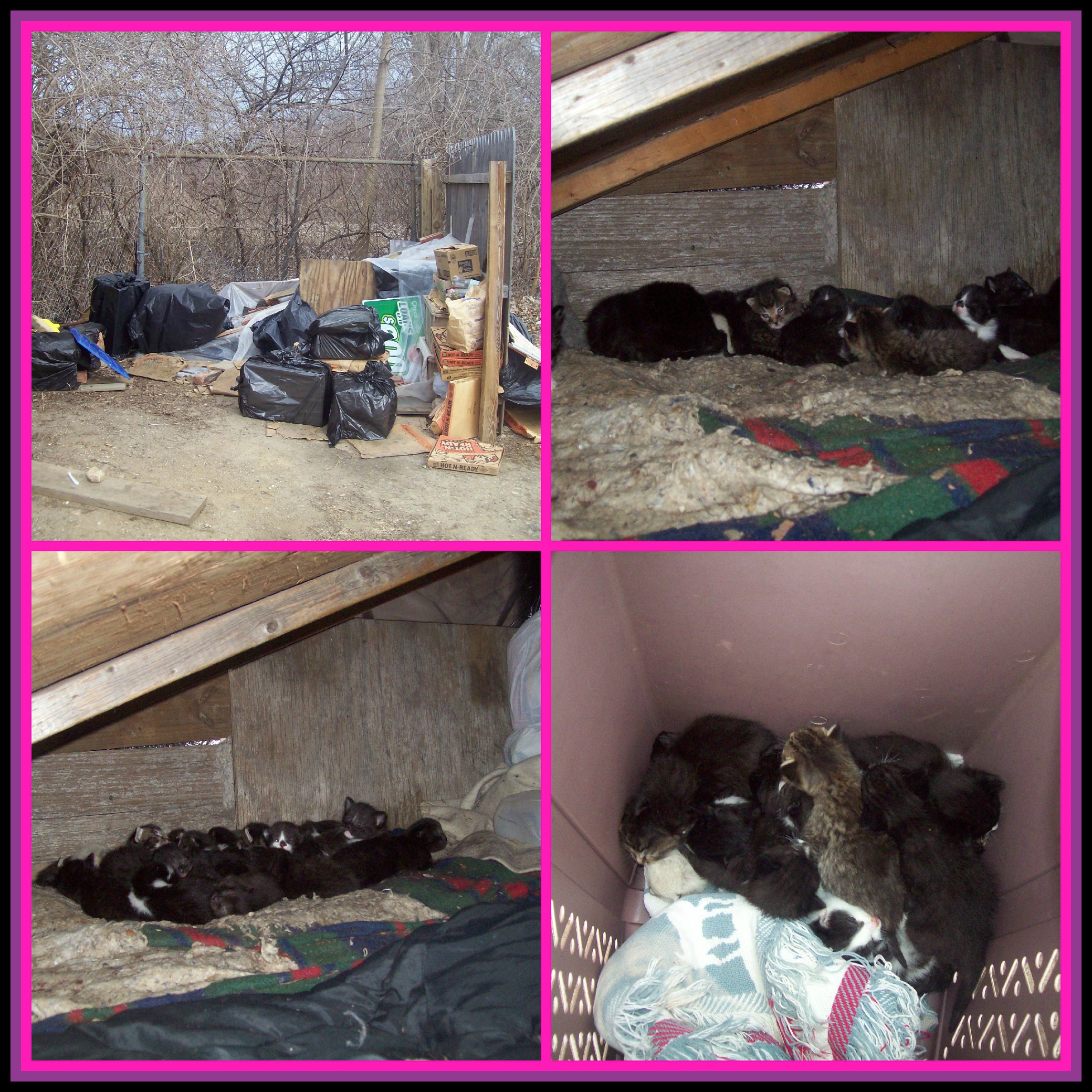