Of course her name wasn’t Mia. Her name had something to do with an alcoholic beverage, which is stupid for such a dainty little girl, so we took the liberty of changing it for her. Mia came meandering out quite unexpectedly one day as we were dropping off food for a family we regularly visit. Standing by the front door handing over large bags of dog food, suddenly she appeared, slinking in between our legs. Then she was just shyly sitting there…quietly looking up. She had slipped out of the door to say hi. And to probably say, “Take me with you”. Her house wasn’t a”bad” house, the 2 dogs they own have been with them for 6-7 years, are inside/outside and we had them fixed several years ago. However it is a very, very loud and chaotic household.

As it turned out, another typical: she wasn’t permanently there…she was being watched by someone who lived in the house for a friend. Or her owner was waiting to get a place where they could have a dog, then coming for her. Or someone was ___ whatever. Whatever, whatever, whatever.

Given we had such a good rapport with this family, and the person watching the little girl was a TEENAGER, we pushed the issue of surrender with mom. “Can we have her please? It doesn’t sound like anyone even knows when this person is coming for her.” Every now and then it’s that easy. Unfortunately less now and less easy, but we’ll take a home run when we can get it. So, counting our blessings we quickly got the surrender form signed, (people change their minds at any given second, hence the quickly) picked her up and placed her in our vehicle, pausing only for a second being caught in a trance by her captivating beauty.

Mia is precious and Mia suffered who knows what which left Mia with significant behavior issues. We are confident she was never physically hurt, so we are going with that line of thought, and thereby want to bring up this: It doesn’t take physical abuse to completely screw up a dog. Adding to this a pup who is already timid or not, living in an environment when your humans are stuck in a lifestyle of behavior loud and erratic enough to warrant frequent police visits, well, what do you think might possibly happen to your psyche? Hate to say it, but little Mia is lucky we got her when we did, still small, because she has already bitten a person or 2. And they weren’t even, “shoot, my bad!” situations. And again, hate to say it, but we have seen pups of the same age who wind up in decent homes with these exact same personality issues. Does anyone have ANY idea how many of these pits are inbred? Wake up. JUST WAKE UP. These pits, these darling, smart, wonderful dogs ALL over the place are largely inbred, and/or bred from sickly parents. Not talking about your pit. Or your best friends pit mix. Talking about what we have seen over and over for more than 25 years directly on the streets. Doesn’t make them not lovable, doesn’t make them less deserving of the best possible home. But what is does make them is not very adoptable. We know it, and you know it.

Mia will make it…she is currently making great strides! But the reality is the reality and whether or not caused, even in part, by the psycho screaming house (where there was affection lavished on her, just kinda schizo, ya know…) and/or just the everyday, nasty, insanely irresponsible breeding, what we have is an incredibly reactive and very unpredictable dog. And one who will be getting bigger.

Sweet Mia. Thanks for coming out to say hi! We love you and thank god we made a special stop to your house on a day off…was clearly meant to be. You’re one of the lucky ones. No, thats not quite right. We are the lucky ones. 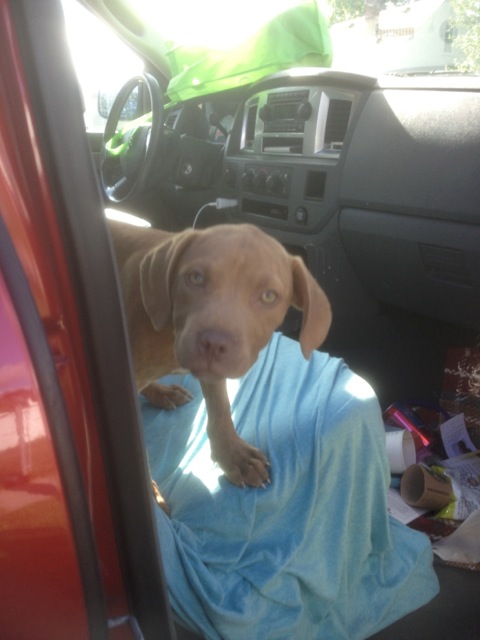