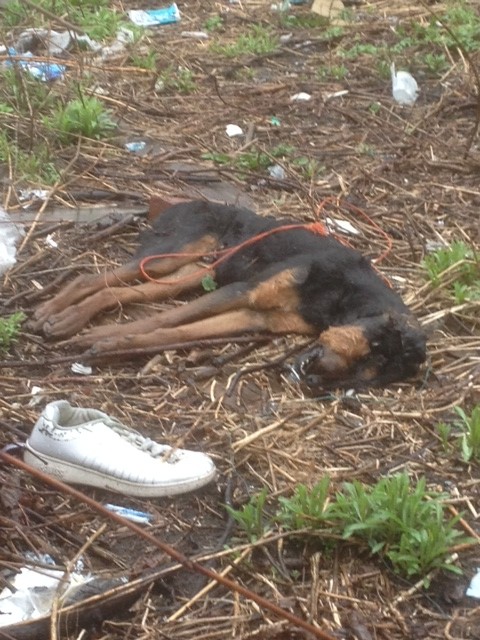 Yes, he is dead. No, nothing can be done to the people who did this to him. Why? Because is body was laying in an alley surrounded by abandoned houses, that’s why. If anyone knew anything, no one was talking and with good reason. That reason being they like to breathe. How did we know he was there? Honestly? We followed that smell of death. Saw 2 stray dogs, stopped to pick them up, smelled that wretched stench you never, ever forget, and a few minutes later boom…practically tripped over a dead dog.

And yet, we somehow stuff it down and keep on. We have to because it never ends. We saw 3 more dead dogs that day. People love to steal, use and abuse, and just throw the bodies all over the place. The odds this dog was stolen are 99.9% They don’t care if the dog has thick skin or long hair or is 10 pounds or 60 pounds – if a kid can get it for his dad or uncle or cousin from your yard, your fb posting of found dog (oh yes..)wherever the path of least resistance is, they will and they do. And it will be dead within 24 hours. The lucky ones, that is. The unlucky ones will be stitched up and stapled and at some point re- used. And/or just left to die.

And the bodies of the dead will just be effortlessly tossed somewhere.