I always said that when Old Boy passed away it would not only be the saddest day ever, but also be the best day…for him.

He wasn’t a favorite, and there are so many, he was THE FAVORITE.  All the way in the back of the yard, in the right hand corner, he lived on his chain. For 14 years, maybe more.
Tied to the fence until he kept digging under it and getting tangled. Then another section of fence, tied to some heavy bricks. Then tied to a big tire until that became a hassle for them to constantly unwind. Then finally success with a post we stuck in the ground. And there he was, glorious in his southeast corner of the crummy yard, year after year.

Extra trips into Inkster during extreme weather; hiking through deep snow, once crawling across the backyard on ice while pushing our gear in front of us with zero visibility, to check on my Old Boy.

Maybe because he was part of my first eye opening, nerve wrecking days on the streets with ACN that he became part of me.  Maybe because after witnessing years of never ending drama at his home, which reached such epic proportions as to become legendary amongst volunteers…in his need for normalcy, that he melted into me.
Maybe because we were just meant to be, Inkster Dog – ACN Volunteer best friends, and that I needed him.

A few days ago I found out he had crossed the Rainbow Bridge and I brought the red plastic flowers and deflated balloon that had scattered themselves across the yard back together again and placed them on his grave. It was nice they buried him and did all of that. It would have been nicer should they have let me take him so he could have gone to dog heaven safe in my arms.

Their claim was he was poisoned. It’s a claim like any other and it could be true but I don’t think so. I think he was a very old dog who succumbed to the 90 plus degree heat and his body just gave in. It wasn’t a great death but it was a death and the end result is the same, its all over now. He simply fell asleep, exhausted from the life he was dealt, and didn’t wake up. That’s what I keep telling myself anyway. And it might be true, who knows. What I do know is I didn’t keep my promise I would get him out and let him live with me like a Pittbull Proper. And I promised I would help him have a nice passing, far away from there. And it didn’t happen, he died on his chain back in the southeast corner. I have successfully negotiated the surrender of too many dogs to count over the years from some of the most insane people, however never could strike the right deal for my favorite dog.

But now he can be his happy black dog self, and that dog was always happy, up there running around FREE, experiencing new things. Perhaps he’s in a lake…he likes to swim! Perhaps he has a knack for old people and is a therapy dog?! And perhaps he can look down on me and send me his Pittbull smile and tail wag when I start to drag from the hell of it all down here on the streets.

This was long for my little street reports, but it had to be. He deserves it.

He was my favorite!

Good bye Old Boy. I’ll miss you jumping up and down on your hind legs and your bark I’d hear before even exiting the car. God speed my friend and thank you for always being there for me. 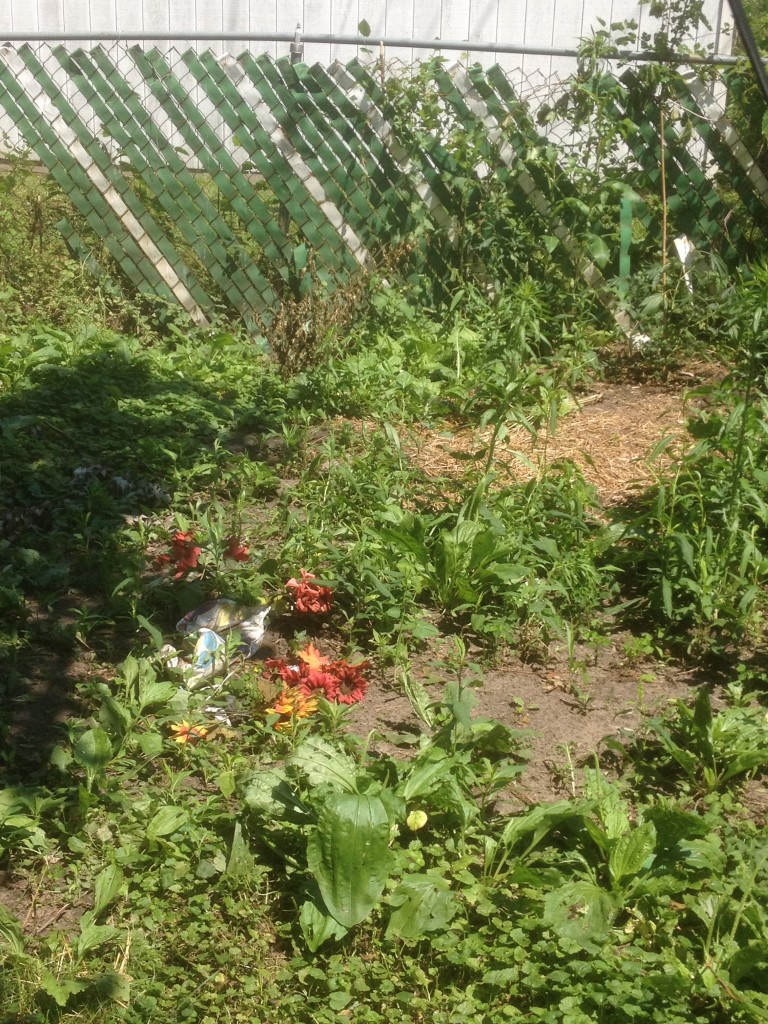