Last Tuesday I (Mindy), along with other Puppy Mill Awareness (PMA) members, went to the Capitol (Lansing, MI) for Humane Lobby Day. The opportunity to speak with our legislators about Bills such as The Puppy Protection Act could not have come about at a better time as I had just recently been to the Allegan County puppy mill bust and the day was still fresh in my mind. 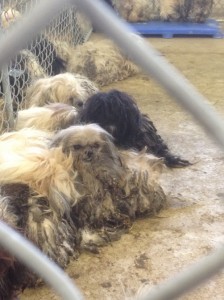 Upon arriving at the Allegan County shelter, my friend (we had been asked to go on behalf of PMA) and I were directed to a building that was divided into several large kennels. What first struck me was the AMOUNT of dogs there were. All huddled together, one Shih Tzu collapsing onto the next…couldn’t tell where one ended and another began. Just a huge mass of filthy white with little faces peeking out from under their feces laden hair.

I wouldn’t say all of the dogs seemed happy as we carried them outside to walk around on the grass. Many just stood there, stunned. They weren’t used to people. They weren’t used to grass. They were used to being 350 deep in a small room in typical filthy puppy mill conditions. A breeding/inbreeding free for all…Shih Tzu – Pom – Yorkie, whatever ‘designer dog’ might be sprung forth, coming to a pet store or “good breeder” near you! 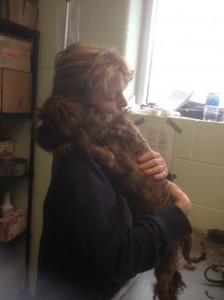 I had been asked to grab some of the ones deemed more aggressive(figures!). After a time of sitting in silence, which I let him have, (who am I to interrupt his first meeting with The World?) he took a few steps, looked up at me, then looked up at the sky and started to wag his tail. It’s always at this very second, during this quiet and new moment, when I get to see something register in the dogs eyes signaling he knows he is safe, that I am reminded why I get myself into these things. 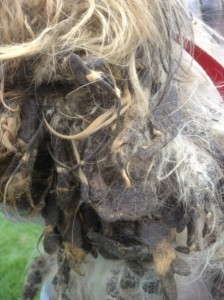 It took every minute from sun up to sun down and an army of groomers (some professional; others with scissors, a heart and patience to learn) to get the last dog freed from their horrifically matted hair. Trying to identify some dogs proved difficult at one point as their incoming weight differed significantly with their post shave down one!)

Out of such misery came 2 positives: 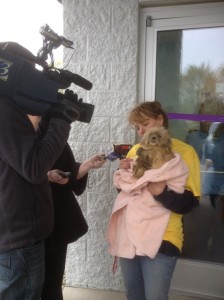 1.  The amount of donations that poured in throughout the whole day. From businesses with volumes of items, to someone with $5 and bag of food. My tear reflexes lost control when a guy came up to me and said he had had his dog put to sleep that morning. He wanted to give all of his beloved buddy’s belongings to the puppy mill dogs. We hugged. I cried. I slobbered something about going to see so n so. Maybe I sent him the right way. Who knows. I was holding a dog with tennis sized crap balls, the Gatorade I had been sucking down wanted out and a tv camera was pointing my way. So we had all of that. Hell can bring out the best in people and that area has some good people.

2.  A personal positive. Having been on “raids” “busts”,  hoarder overloads, whatever things before, I had never been on one that consisted entirely of small dogs. These dogs were going to be adoptable.

Taking yet another pregnant mommy (babies being born as they came in) into the baby room I found the real rescue group action.  These poor mommies…they were aged so far beyond their years. Barely any life left in their eyes. Pink skin showing underneath the loss of hair around their faces. Another Puppy mill female bred to the brink of death.
As far as The Little Shelter That Could (Allegan County Shelter), I was so impressed with the staff and people who were making that mad house move along so efficiently. Who has 350+ dogs dropped from the sky and handles it so well? 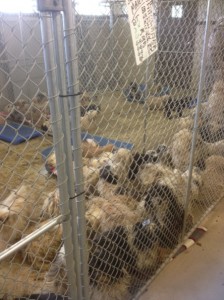 You can make a stand against puppy mills. The thought of public speaking makes me suddenly think I have the flu but I did it last week with my Senator and Representative.  Go to Puppy Mill Awareness Meetup to learn how to join protests…print out Fact Sheets to learn about these bills currently on the legislative table. There are links to find your local representatives numbers and emails as well as examples of what to say and what YOU can do. Pam Sordyl of Puppy Mill Awareness is easy to talk to and can help guide you.   You can also go to the HSUS website. Jill Fritz, Midwest director is an incredible source and can also answer any questions you have.

YOU CAN HELP TO MAKE A DIFFERENCE  (yes you can) 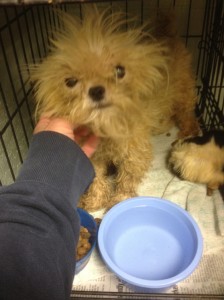 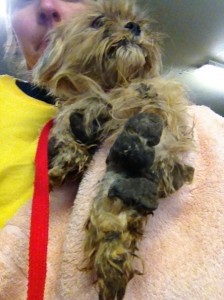