With crime and poverty rates well above Michigan’s average, Pontiac is a tough place to live.

This holds true for animals as much as for people.

Currently funded and supplied by pet stores, private donors and grants, and assisted by local veterinarians, the organization started 23 years ago with a couple of ladies feeding local animals on their lunch breaks from the GM plant.

Shari Scott says she used to walk for fitness during lunch. “We used to notice the animals,” she said, and she started taking them food. “I used to feed all the dogs in the neighborhood.”

The organization grew from that spontaneous gesture to highly organized teams of two to four people going out 52 weekends a year, regardless of the weather, with call lists of up to 200 addresses where assistance has been requested or a problem reported. They load up with donated straw for bedding, food, and shelters, and go knock on doors.

Working closely with law enforcement and animal control, and networked with area rescues, the Animal Care Network has taken over 14,000 animals off the streets of Pontiac. They have spayed and neutered over 6,600.

“When we first started, there were packs of dogs everywhere. Now if you see a dog running, it probably got loose. And that I’m very proud of. It took us a long time to clean it up,” said Marie Skladd, one of the original ACN volunteers, who has fostered several of the rescued animals. “Pretty much everybody fosters animals. You can’t help it.”

A large part of ACN’s operation is helping pet owners care for their animals. According to Porteous, ACN was the first group to help with food. “That’s the biggest thing that helps people keep their animals,” she said.

Tanisha Harlow of Pontiac struggles to care for her two dogs and two cats, one of which is elderly and can’t eat hard food. Harlow’s husband is on disability and with rises in canned food prices, Harlow was in danger of having to put her 22-year-old cat down.

ACN has helped with regular deliveries of canned food. “It’s always at the front of my head, ‘What would I do without Pam and her crew?’” Harlow said. “They’re just God’s gift to the animals. They really are.”

According to Scott, a key part of ACN’s success is educating people, especially children, who don’t know about giving animals plenty of water or that a growing puppy’s collar must be adjusted regularly to prevent choking. “It’s a lot better than it used to be,” Scott said. “I’m sure we have made a huge dent in Pontiac in terms of educating. If you start them young and raise them up they’ll know it.”

“Education is the key,” echoed Kathy King, a retired Pontiac school teacher and a recent ACN volunteer. King has been with ACN for three years now. “I saw it on the front page of The Oakland Press the day after Christmas and I sat there boo-hooing, and I said to myself ‘Get off your butt and do something,’ so I called Pam.”

Seeing animals chained up in inhumane conditions or dangerously inclement weather, often inaccessible to the volunteers because owners are absent, is a regular part of the job.

“In the winter, no body fat, they just curl up and die. In the summer, it’s so much worse. They’re out in the sun. Their brains are frying. They’re covered with flies,” says Skladd.

King says there are situations in which all they can do is speak to the animals and come back later. “At least for a minute when I’m out there, no matter how bleak the situation, that dog has had a little bit of love,” she said. She keeps at it, she says, because “someone has to be out there to be their voice. Someone has got to do this.” 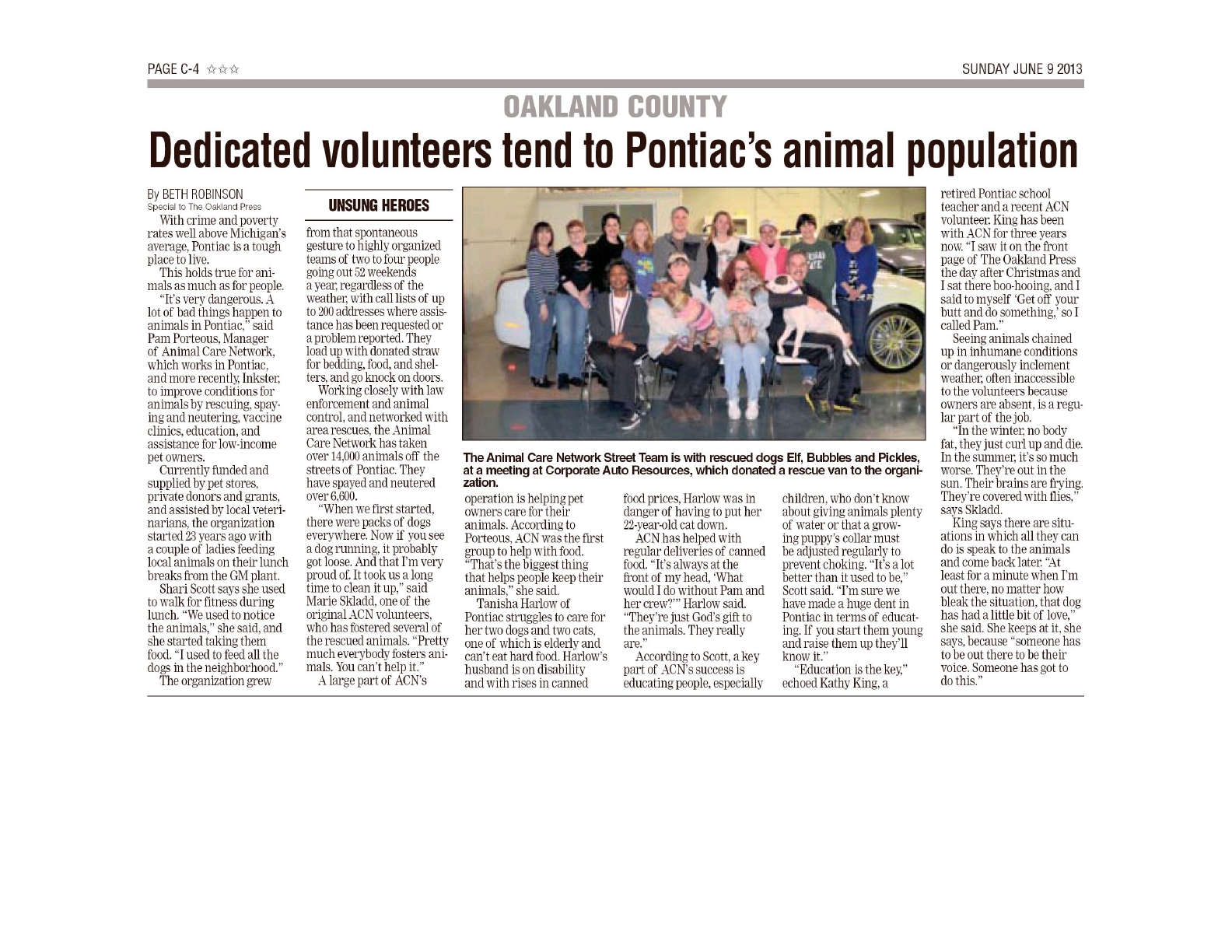