By RUTH FREEMAN
Special to The Oakland Press 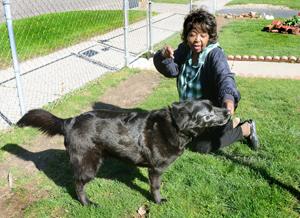 Tiger always knew when the kids came home from school.

Growing up in Pontiac, the youngest of nine children, Shari Scott’s family dog waited for them at the corner every day as they walked home.

“I knew he was always there,” said Scott, 68, who has volunteered with Animal Care Network since 1994.

“As long as I can remember, we had dogs.”

Years later, when Scott was working for General Motors in Pontiac and took walks during her lunch break, she saw how some animals in the area were kept. She began to bring them food. After work, she took a bucket of water around the neighborhood to give them a drink.

Scott joins the fellow Animal Care Network volunteers in responding to calls in the community. She speaks at city council meetings on animal issues and helps distribute information to the community about resources to help animals, said Pam Porteous of the care network.

Scott believes in civic engagement. She helps people register to vote with Pontiac Concerned Citizens, and is chairwoman of the fundraising committee for Pontiac Meals on Wheels, which delivers food to senior citizens who have trouble leaving their homes.

She also is a member of the Pontiac Democratic Club, and Trinity Missionary Baptist Church.

Scott graduated from Pontiac High School in 1962, and is helping organize her 50-year class reunion.

“It was a great, great, great childhood back then,” she said, and added that kids played on the street and everybody knew each other.

Scott was in the senior girls singing ensemble, which she called a “good experience.” The students sang in local banks at Christmastime.

Scott said she loves music, and would like to see the Pontiac school system improve.

“I’d like to see that more than anything else,” she added.

Scott said that when she went to college, the career options for black females were secretary, teacher or nurse. She graduated from Wayne State University in 1966, with a bachelor’s degree in education.

She said that if she’d had different role models or career guidance, she would have become a veterinarian.

After teaching for a few years at an elementary school in suburban Detroit, she got a job at General Motors. She held different jobs with the company, including working with a recruiting team that went to minority colleges all over the country, which she loved.

A game show fan, Scott was on “Wheel of Fortune” after she retired. She won a trip to Morocco by solving four out of five puzzles, and took her nephew, Bret.

Bret turned out to be a perfect match when Scott, a diabetic, needed a kidney in 2005.

She said she’s passed her drive and values on to nieces and nephews. She’s glad that her niece, Brandi Pritchett-Johnson, a professor at the University of Florida, still calls for advice.

“I’ve lived a varied life. I’ve lived a happy life,” she said. “I have no regrets, to tell the truth. Things worked out they way they worked out.”

The Michigan Animal Adoption Network/Animal Care Network is a 501(c) 3 non-profit organization that survives on donations to continue its low-cost spay/neuter program, street rescue efforts and to find loving homes for homeless pets. The group, founded in 1994, rescued more than 12,000 dogs/cats, spayed/neutered more than 5,600 and has visited more than 90,000 addresses reported for animal abuse/neglect. These programs have received national recognition from Linda Ellerbee of Nickelodeon News and received an Animal Planet nomination. To learn more about the group, visit mi-aan.org or email miaan@att.net. Write to Animal Care Network, P.O. Box 566, Roseville, MI 48066.