Pam Porteous: Quitting on Animals, Not an Option 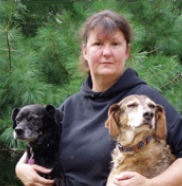 As the sun illuminates the outskirts of Pontiac, Michigan, Pam Porteous is greeted by the hungry faces of her personal dogs, foster dogs and cats. Pam offers them sustenance, shelter and much love, but these are not the only animals she cares for, not in the least.

Once her household is satisfied and settled, Pam climbs into the rescue/transport van, ensuring that the cages are clean and sterile before driving into Pontiac to pick up dogs and cats at multiple households. Every morning, Monday through Friday, Pam transports animals of Pontiac to veterinary appointments through the Animal Care Network (ACN) spay/neuter program.

With 20 years of animal care experience, Pam has heard every reason for animals missing appointments, from lack of transportation or gas to owner forgetfulness, and more. Taking on the commitment herself, she ensures that missed appointments are no longer a problem.

Many times people are still sleeping and I have to call and call and knock and knock to wake them up. But I wait and load up the animals and check them into the veterinarian for surgery. I then head into the city to rescue other animals, do food drops, pass out vaccine clinic flyers, check out situations, etc. Our list is always long but every address gets a visit.

In 2006, for the Animal Planet Hero of the Year Award, Pam Porteous was 6th of the top 10 nominees.  Dedicated volunteer Hanna Gibson wrote in Pam’s nomination:

Pam Porteous “adopted” the town of Pontiac, Mich., 15 years ago and developed the most innovative urban community outreach program in America, to ensure that every animal has a chance to live a healthy and happy life. Hers is a holistic and highly interactive approach to animal welfare; she personally visits any home with animals to ensure each family is taken care of so that the animal will be, too. … Pam knows most people in Pontiac, and most know her — from drug dealers and prostitutes to pastors, children, the police department and city employees. Any and all call her whenever they or an animal needs help. The effect of her approach is profound.

That effect of Pam’s work is measurable as the Animal Care Network is responsible for:

So how did Pam become best friend to an entire city of animals? It began with volunteer experience and a striking observation. She says, “I started walking dogs at a local animal shelter and in that community noticed all kinds of dogs chained in backyards and dogs and cats wandering the streets.” Pam then volunteered at the Animal Care Network street program when ACN was founded in 1994. 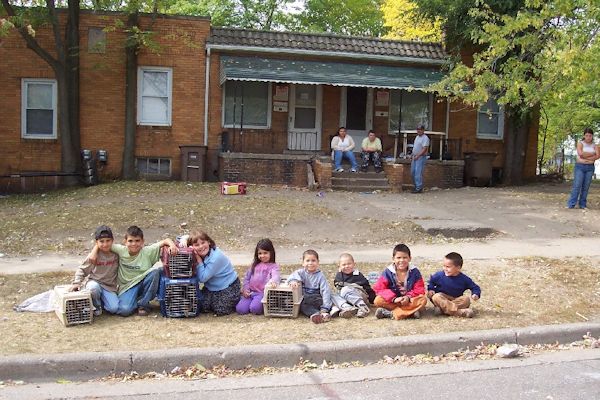 Now Pam educates families and distributes food, water, hundreds of doghouses, thousands of straw bales and other supplies. Her neighborhood talks cover the importance of spays/neuters, vaccines, and the dangers of cold weather, hot weather, and chaining.

The city of Pontiac, with a struggling economy, poses many challenges for people and, as a result, for their animals. According to the 2010 census, 22.1% of the population was below the poverty line.  Pam describes three significant consequences of lacking care, whether due to economic hardship or other issues, that truly stand out in her daily dealings:

1) Dogs used for breeding, moneymaking purposes and then either given away, passed around the neighborhood or dumped on the streets to fend for themselves

These poor mother dogs are forced to have litter after litter, without proper food, water and vet care. Then they are just abandoned. We rescue many of these mom dogs from the streets, malnourished, still filled with milk, with infections and just so, so happy and grateful to be rescued.  Many of these puppies are sold or given out on the streets at two – three weeks of age

2) Dogs and puppies suffering from the parvovirus

Many of the people in our target area just leave the dog or puppy in the backyard to die. Two people actually put their dying dog on the curb where the garbage goes. Thankfully we got wind of these situations and responded immediately.

3) Faithful chained backyard dogs that sit and wait for someone to bring them food and water, day after day and nobody ever shows up

Many times we are notified of this too late to save the dog. It is very disturbing to find a dying or dead dog just curled up in the doghouse, almost giving up.

These situations are clearly dire, but the Animal Care Network makes a tremendous difference. Members of the community, including utility workers, social service, delivery people, keep their eyes on the animals in ACN’s target area and call Pam when something is amiss. In one such case, ACN received a tip that some people had moved away and left an emaciated, matted dog with one leg dangling from the hip in the backyard. Pam responded to that situation and says:

She had probably been waiting for someone to come help her for quite some time. ACN was able to get her to one of our awesome rescue partners.  She needed to have her leg amputated and was soon adopted by a great family.  We see Penny every year at an annual walkathon put on by this rescue group and they simply adore her. Had we not had this tip, Penny would have either died from infection or starvation.

Happy endings like this are what keep ACN members energized. And not all situations are devastating. Sometimes people offer loving homes to their pets, but they need a bit of help with food provisions, vaccinations or transportation. Because they help so many people and pets in the community, families often call Pam and ACN’s volunteers angels. But earning that honor is never easy.

Many days, we dread even going into the city and I myself even make up excuses not to but, once I get going, at the end of the day we have made such a difference and you say to yourself, I am so glad that I came into the City today. We feel that this program is definitely our calling.

For Pam and volunteer Hannah, quitting is not an option. Hannah explains:

I have seen many volunteers quit when the emotional burden becomes too overwhelming.  Those of us who stay are constantly overwhelmed, yet will never quit.  If we quit, even for a day, even for a moment, there will be no one looking out for these animals and they will suffer.

Pam Porteous was recognized as the Humanitarian of the Year by the Michigan Federation of Humane Societies and Animal Advocates in 1999 for her vast and valuable community work in Pontiac. Since then, the work of ACN has overflowed Pontiac’s city limits. In 2009, teen volunteer Jin Swartz was featured on the Nickelodeon News and, in 2012, the Animal Care Network was featured in the Best Friends Magazine. BTC4animals.com is both humbled by and proud to share Pam’s heroic life with you, too, celebrating a woman who has selflessly changed the lives of thousands of animals for the better.

Written by Kim Clune, at BTC4animals.com