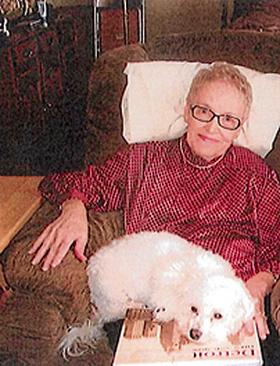 When Betty Thornton died at 77, she left the Michigan Animal Adoption Network a generous donation.

“A dog will always meet you at the door with a wag in its tail,” Thornton often said, according to the nonprofit.

The Troy resident volunteered with Leader Dogs for the Blind after retiring from Ford Motor Co., and was a nurse at Harper Hospital before going to work for the automaker.

“We are so honored to have been chosen as a beneficiary,” said Marie Skladd, president of the Adoption Network. “Thanks to generous friends like Betty, we are able to continue to help those that cannot help themselves. The donation will allow us to continue our efforts by providing much-needed supplies on behalf of the animals in our community.”

A condition of Thornton’s donation was that the exact amount not be disclosed said Lindsay Warren, public relations director for the Michigan Animal Adoption Network.

The nonprofit finds homes for dogs and cats, and its affiliate Animal Care Network, visits pets living outdoors in Pontiac and Inkster every weekend of the year. The organization has operated in Pontiac since 1994, Warren said.

The organization’s volunteers, after making sure a person’s animals are spayed and neutered, will check on them and make sure they are living in adequate conditions.

Every weekend, volunteers ensure “animals who live outdoors are properly taken care of,” with a doghouse, straw, food and water, Warren said.