Michael Vick might have gotten a second chance, but hundreds of thousands of dogs will not be so lucky. Over the last few years, dog fighting has become a household term used to describe the underground sport associated with urban epicenters across the United States. The star quarterback recently hurled dog fighting into the national spotlight, but for centuries, people in every corner of the world have used dog fighting for entertainment. Unfortunately, the Pit Bull Terrier has been chosen as the ultimate competitor for this covert sport: dog fighters sculpt the loyal breed into fearsome competitors, branding Pit Bulls with a tainted reputation. However, what we pick up from news headlines doesn’t dare scratch the surface of this widespread pandemic, and Detroit is no exception. 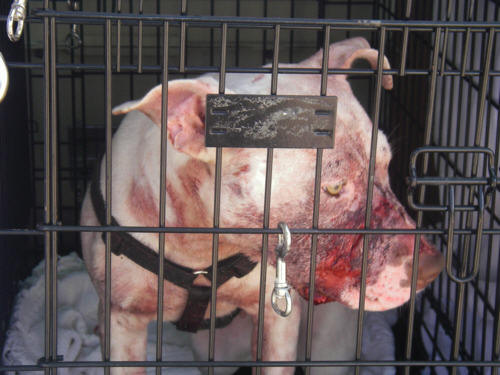 Within the 143 square miles of Detroit, hundreds of dog fighters continue this practice, with more popping up every day. The city is plagued by unemployment and teetering city leadership, which gives way to difficult economic times for those struggling in the city. While most scour Metro Detroit looking for jobs, others turn to dog fighting to get their hands on fast cash. From this select group stems varied levels of dog fighting competitors, ranging from amateurs – who fight dogs for street credibility – to businessmen earning hundreds of thousands of dollars on a single fight. The American Society for the Prevention of Cruelty to Animals (ASPCA) categorized the different levels of fighters into three groups, “street,” “hobbyist” and “professional.”

Debbie MacDonald, investigator for the Michigan Humane Society’s Cruelty Investigation Team, explains that dog fighting is much more ingrained in the metro areas of Michigan than people would think. This twenty-year veteran said, “The street fighters are usually made up of teenage kids fighting dogs in alleys and vacant homes. But the professional fighters also have a strong presence in the city.” Professional fighters are much more organized than the amateurs, with a lot more money at stake. Professionals can earn upwards of $30,000 on a single fight in the Detroit area, and nationally, these fights can produce up to $500,000 in profit.

Professional dog fighting is often compared to the world of boxing, in that the most in-shape and well-trained athletes yield the most money. For this reason, professional fighters must condition their dogs to become the ultimate gladiators. The fighters seek out Pit Bulls with a history of fighting in their bloodlines, often getting these dogs while they’re puppies so they can begin the rigorous training early on for a better result. The vicious training process depends on what the dog fighter is willing to invest. For some, it includes running their dogs on treadmills for hours and strapping weights to their necks as a form of weight training. Owners even go to the extent of injecting their competitors with anabolic steroids to enhance muscle growth and strength; the use of narcotics to amp up their dog’s aggression is also common. Not only are these Pit Bulls conditioned physically, but their trainers tactfully craft psychological manipulations as well.

Most fighting dogs spend their time in small cages or are restricted on heavy chains far from contact with other dogs and people. They are forbidden to be socialized with other dogs, causing extreme anxiety. Keeping them isolated is critical to enhancing aggressive behavior in Pit Bulls, which makes them fierce competitors. Street fighters don’t have the capability of strict training regimens, so instead they use unimaginable tactics like starvation and constant beatings to instill their dog’s aggression in the ring.

Once the fighter is in elite physical condition, a practice called “baiting” is used to build the dog’s confidence before entering the ring. Baiting happens when the fighting dog is unleashed onto a weaker, non-fighting dog: once the baiting dog is literally ripped to shreds, the fighting dog is rewarded for its behavior to encourage the relentless aggression. Baiting dogs are usually strays or stolen dogs taken off the street. Daniel Carlisle, with Detroit Dog Rescue says, “Sometimes the fighters attract strays using a female that’s in heat. Once they get a hold of them, they’re starved without food or water to make them weak.” Carlisle will never forget when he walked into a garage in Detroit and saw a dog ready for baiting. He says the Pit Bull was hanging by its leg from a thick chain hooked to a

2” x 4” board on the ceiling, barely able to touch the ground, while a female fighting dog taunted nearby. He says you can walk the streets in many parts of the city on any given day and see baiting dogs chained to trees with their ribs poking from beneath their skin and saliva coating their mouths. Nearly 50,000 stray dogs roam Detroit, which provides an endless supply of baiting dogs for dog fighters to use and then dispose.

During the baiting phase of training, the dogs must learn the taste of blood. Trainers will use puppies or kittens to teach the dogs how to kill and give them the drive to attack for blood. Much like bating dogs, there is an abundance of abandoned litters of both cats and dogs in vacant homes lining the city. The trainers view the innocent young as objects to help their competitors develop a skill set, much like a boxer uses a punching bag to refine his left hook. When the Pit Bulls develop a taste for blood, trainers will hold the puppies and kittens out of reach from the dogs to taunt them until they are hysterical with aggression. As a reward for this temperament they’re given the young as a treat to rip apart like a stuffed toy.

After months of training, the dogs are prepared to go into the ring. Depending on the level of dog fighter, the brawls are held at different venues. Street fighters set up fights anywhere they can, such as garages and backyards. Carlisle said, “I’ve walked into garages with collapsible fighting rings made out of plywood. There’s a blood spatter all over the walls, so you know there’s been fighting going on.”

Professional fighters tend to hold matches in large pull barns outside of the city as not to attract the attention of the police. With thousands of dollars at stake, more rules and regulations are required for each match and of each dog. Fights can last a few minutes to several hours. Typically dogs won’t fight to the death but will continue until both dogs have sustained significant injuries and one can’t fight any longer. Pam Porteous, of the the Animal Care Network, a rescue organization based in Pontiac, says fighting dogs can have broken bones, shredded skin and painful abscesses following a fight. The undeniable and heartbreaking fate for these dogs comes after the dust is settled and a winner is named. Winning dogs are praised and rewarded for their showing, but for the losers it’s a dark reality ahead. According to the ASPCA, unless the dog has a winning history they are likely discarded. Losing dogs are often executed by blunt force trauma, hanging, shooting or drowning. Some owners will go to the extent of killing off the losing dog’s litters to prevent developing a losing bloodline of fighters. Some Pit Bulls are simply left to die, chained up in vacant houses, or left to roam the streets with untreated injuries. “Many of the dogs are dumped and thrown away like trash,” Carlisle said. “A lot of the Pit Bulls you see dead on the side of I-75 in Detroit came from the ring.”

Each year The Animal Care Network comes across hundreds of dumped Pit Bulls from dogfights. “It’s not difficult to see who’s been in fights. They have layers of scarring and bite marks covering their bodies,” Porteous said. “We got a call once about some Pit Bulls chained to a tree in the middle of a cemetery. When we got there one didn’t have an ear and one of them had so many bite wounds that their head looked like a watermelon.”

Most of the dogs that are dumped will die. But for the few that survive their wounds, the chances of these dogs finding suitable homes is slim.

Michigan has some of the toughest dog fighting laws in the country but it doesn’t deter the sport from continuing. The Michigan Humane Society cruelty investigators have well over a hundred warrants out at any given time for dog fighters. “It’s difficult to crack down on fighters because you catch one and then another pops up somewhere else,” MacDonald said. Her team works closely with the Detroit Police Department to prosecute as many offenders as they can. In Michigan, dog fighting is a four-year felony but the maximum sentence isn’t always given. Unfortunately jail time isn’t enough to stop people from fighting Pits. The Cruelty Investigators see a lot of repeat offenders because, when times are tough, it’s an inexpensive way to make money.

Contrary to what some may think, dog fighting is a priority of police departments in the inner cities. It’s almost always linked to other criminal behavior including drugs, gang violence and even murder. MacDonald has dealt with several homicides over the last twenty years that have been traced back to dog fighting. Beyond the hands of the law, animal rights and rescue organizations work tirelessly to rescue fighting Pit Bulls.

Pam Porteous spends most days driving the streets of Pontiac responding to calls of dumped or abandoned dogs. The Animal Care Network joins forces with the Pontiac Police Department to gain access to these Pit Bulls to help remove them from their situation. If they are able to seize the dogs, those who suffered from extensive wounds receive medical treatment donated by local veterinarians, but this is no guarantee they will make it. If they are lucky enough to live, the next step is trying to rehabilitate animals previously trained to kill.

When all is said and done, the city of Detroit is left with hundreds of former fighting Pit Bulls who somehow survived the life of fighter and now have no place to go. It’s been difficult for The Animal Care Network and Michigan Humane Society to promote adoption of former fighting dogs. The stigma that follows the breed is deeply ingrained in American society and it doesn’t seem to be changing anytime soon. Rehabilitation isn’t promised for every former fighting dog, as some know nothing else but how to kill and will never be able to shake that compulsion. However, the success stories of rehabilitated Pit Bulls are becoming more and more prevalent across the country. As dog psychologists and animal rescue organizations learn techniques to deal with trained fighting dogs, the hope is that the success rate will continue to rise.

In the meantime, animal shelters remain lined with Pit Bulls waiting to be adopted, who, from far away look like any other dog that needs a home. But when you get up close to the cage and squat down, you can see the layers of scars from under their shiny coat, countless battle scars from a life they didn’t choose. You can see their innocent eyes looking up from drooping lids, wishing to tell you their story – if only they could.