We found Red by way of a tip from someone who is friends with a family we used to help. (a compliment, wanted to note!)

Red hasn’t had too many good days of late. The police have visited his house at least 3 times recently. Kids throwing fireworks at him. Kids jumping the fence and teasing him, hitting him with sticks.

No, we don’t know either why they won’t just bring him inside when such things occur. Our understanding is that the calls wound up under domestic issues, so whatever. The call to help Red came to us and we went that same day.

Red was tangled. Red had 2 chains around his neck…one pretty thin and one very heavy. The thin one was starting to cut into his neck. As if it isn’t bad enough that he has to live on a chain, he also gets to live in constant fear of a kid fence jumping just to torture him as well as live with the pain of a collar becoming one with his neck.

If the owner had stuck by her word on the phone that she would surrender him to us, the obvious signs of Red becoming a potential fear biter could be halted. He is borderline now and honestly I don’t know why he hasn’t bitten someone already in an attempt to defend himself from that chain, except for the fact that he is a Pitbull. The heart of a pit bull. The ability to endure so much.

But, as it often goes, right before the surrender forms were signed and we were about leave with another precious soul, a cousin or brother or brothers best friend decided they were coming for the dog. No amount of negotiating or any pitiful amount of $ we could throw together to offer for him was going to work. Often we get lucky, but not in this case.

Nothing we can do legally if the dog looks healthy enough and has shelter, or some contraption intended to harbor the animal from weather, and some sort of a container to perhaps hold water one day. Well wait, not much one can do even if the dog looks like hell. And this is why we are out here doing this sanity-sucking work every day, for hours and hours a day. Its for dogs like Red.

We miss social events, we leave early during Christmas dinner, we get our kids to school late, we pick them up late, we cancel dentist appointments…(we pretty much become unpopular) because 20 plus years has taught us that no- one is coming to help these dogs. If we don’t stay in that yard until dogs like Red are free from hazardous materials surrounding them, free from any chain problems, (it took 45 minutes to free Red of the thin chain and more to untangle the feces ridden thick one) give them large bowls of fresh water, fresh food, coat their fly bitten ears with bag balm and sit and talk to them, who will?

There was one silver lining and that is little Detek who you see in the picture. One kid out of the 8 living in the house who liked the dog, and the only kid within 100 miles the dog could trust. He is only 7, yet somehow he goes out there despite peer pressure, to play with Red and to give him water. Quite remarkable.

We will be checking back to see if Red stayed. And to give Detek an Animal Care Network Good Kid certificate. 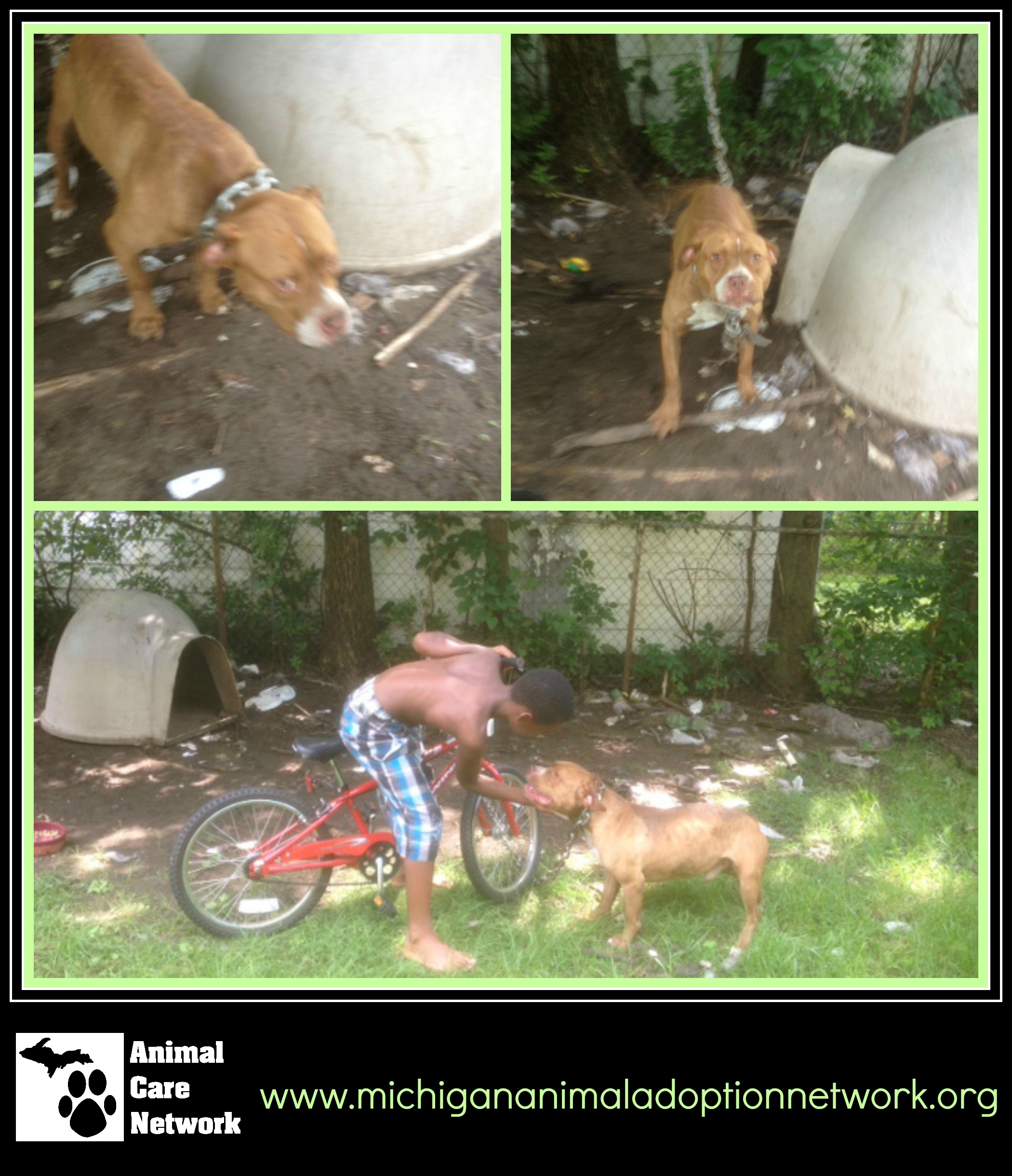