By JERRY WOLFFE
gerald.wolffe@oakpress.com; Twitter: http://bit.ly/sWhWCT”>@jerrywolffe Of The Oakland Press 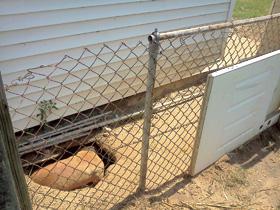 It’s hardly evident that a dog is man’s best friend, considering many are left to their own devices to try to survive in this deadly heat wave.

“I have received many phone calls about dozens of dogs dying daily during the last two weeks,” said Pam Porteous, the Animal Care Network manager in Pontiac.

The animal care staff recently went to homes in four Pontiac blocks and found “83 dogs and puppies” in the heat without sufficient water or food.

“I’ve seen people dragging pit bulls down Perry (Street) and the dogs will collapse. I saw two of them collapse in the heat. When a dog’s body temperature reaches 106 Fahrenheit or above, it is deadly.

“I think there are hundreds of animals in Pontiac that are either abandoned or not being cared for properly in this heat.

“Abandoned dogs and cats die of heat stroke. Cats may be a little better off because they are not chained up like dogs are.”

Animal Care Network has an outreach program “to specifically target Pontiac and Inkster.”

“We distribute food and plastic dog houses and offer spay and neuter service,” she said. “That’s the most important service we can offer … that way these animals aren’t reproducing and perpetuating the problem.”

Porteous said her organization “had a report of a dog that dug himself into a hole trying to escape the heat.

“He was so hot. He just kept digging because it was cooler in the ground,” she said. “He was just a mixed breed dog on a chain in a back yard that no one was checking on.”

Four dogs on chains in Pontiac strangled to death because of fireworks this week, she said.

“They’re on chains in someone’s back yard and they are alone,” she said. “They get scared by the noise of fireworks, get agitated and jump and their chain gets hung up on something such as a fence and they die from suffocation.”

Caring for an animal is not that difficult, she said. Pet owners should keep the animals inside or in another cool place, provide them with water and check on them regularly when temperatures become extreme.

“To give a dog water doesn’t cost hardly anything. “Dogs are like people,” Porteous added. “If it is too hot for you, it’s too hot for them. If a dog doesn’t drink water, it will become dehydrated, so it must depend on the goodness of people to survive this heat.”

It is especially dangerous to lock an animal in a vehicle in high heat.

A dog inside a car can “die rather quickly” from heat stroke or heat exhaustion, Porteous said. “The temperature inside a car soars to deadly levels in minutes.”

Any animal that is overheated or found unconscious should immediately be taken to a veterinarian for emergency care, she said. If it is dead, call Oakland County Animal Control to pick up the carcass.

“If people are going to have pets, they have to take care of them and protect them in this extreme weather,” she said.